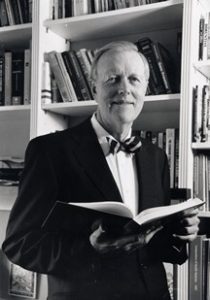 Dr. Burke, born in Queensland, Australia, had a penchant for adventure – intellectually, spiritually and globally. He was the son of William and Dorothea Burke. His maternal grandfather, Frederich Schmidt, was one of the first Queenslander settlers and was a devout Roman Catholic who had a strong spiritual influence on his grandson. In 1957 Patrick was ordained a Roman Catholic priest. Patrick and some of his family were early members of the Legion of Mary in Australia, Europe and America.

Professor Burke pursued his Doctorate in Theology on the nineteenth century theologian, Matthias Scheeben, at the University of Munich in the 1960s, and thereafter joined the faculty of the University of Iowa.

As a young theologian he accompanied his cousin, Bishop Doody of Armidale, New South Wales, Australia, to the Second Vatican Council in Rome as peritus and theological advisor. Afterward, in 1965 he became Director of the John XXIII Institute at Saint Xavier College (now University) in Chicago, where he organized a significant conference dealing with the principal theological problems facing the Church and edited the record of the proceedings under the title The Word in History: The St. Xavier Symposium (1966, Sheed and Ward). While in Chicago he produced an abridged English translation of the six-volume work on dogmatic theology written in German by Professor Michael Schmaus.

Subsequently, in 1967, he requested and received permission to laicize, and in 1971 married his lovely wife Frances Margaret Leicht (Marnie), who preceded him in death in 1994.

After an additional year of study in Munich, he joined the faculty of Temple University, spending his summers studying religions in the Middle East and East Asia. His multiple speaking and study tours abroad from Germany to Taiwan to Jerusalem and many other destinations produced insights for his books The Reluctant Vision: An Essay in the Philosophy of Religions (1974, Fortress Press), and The Fragile Vision (1979, Macmillan), exploring religion’s relationship to culture. In the 1980s he turned his academic focus to justice and economics, authoring No Harm: Ethical Principles for a Free Market (1994, Paragon House). Dr. Burke wrote and lectured extensively on the topic of Social Justice.

Throughout his 86 years Patrick tried his hand at a variety of interests beyond academics, including real estate, flying, the piano and even politics – running as the Constitution Party’s candidate for Congress in 1996 and in 1998 against Joe Hoeffel and John Fox. Their debate is still available for viewing on C-SPAN.

In 2003, Professor Burke established The Wynnewood Institute, a non-profit, non-partisan research institute concerned with the fundamental questions and problems of Western Civilization in a post 9/11 era.

The inaugural lecture of the Wynnewood Institute was presented by the English philosopher Sir Roger Scruton, titled, “The Defense of the West: How to Begin.” Subsequent lectures were offered by a host of impressive speakers including Patrick Barron, Wiliam Dunkelberger, Victor Davis Hanson, John M. Haas, Amity Shlaes, Leonard Swidler and Walter Williams. This fostered a whole new cohort who pursued academic debate and understanding through philosophy and religion.

After 2004, Dr. Burke’s insatiable pursuit of excellence and understanding of humanity inspired him to pursue a Doctor of Philosophy, under the tutelage of the noted British philosopher Sir Roger Scruton, which he completed in 2010. His thesis resulted in the weighty book, The Concept of Justice: Is Social Justice Just? (2011, Continuum International). This led to Professor Burke addressing the 49th Annual Meeting of the Philadelphia Society, of which he was a lifetime member, in April 2013. He continued to present numerous lectures in academic and political venues throughout Europe, including before the Hayek Societies in Berlin and Vienna, and presentations before members of the European Parliament in Strasbourg and Brussels.

Professor Burke was extremely generous in sharing his knowledge of philosophy, economics, science, aesthetics, and theology with the many students who followed his teachings. He never hesitated to take the time to answer questions and press for further understanding. His humor was a great asset which lightened the burden of the very deep thinking he inspired. Patrick, or as he liked to be called, “Pat,” brought much to this world, leaving behind him many who are now wiser and more enlightened.

In his last years, he continued his academic efforts by editing his lectures to produce a book dealing with science and religion. As was his habit, he typed well past midnight, until his final illness overtook him. Dr. Burke’s final instruction as a highly productive academic was not about secular philosophy but rather the transcendent life objective “ALL FOR CHRIST” (Philippians 3:7-8). He lived with a profound concern for others, inquiring earnestly about the welfare of others rather than sharing the burdens of his own life. He died at peace, confident in the conviction the best was yet to come.

Professor Burke held a deep devotion to the Blessed Mother as evidenced in his intense study of the Marian Apparitions. As his nephew Michael Lynch in Australia put it, “His courage during that time and his strong commitment and love of his Catholic faith and his devotion to Our Lady helped him on his journey into eternal life,” the mystery yet to be explored by him.

He is survived by family in Australia and on the West Coast, and by countless grateful students who will remain blessed by his teaching.

Memorial gifts may be made to St. Mary’s Catholic Church of Conshohocken (address above) or Holy Family Home, 5300 Chester Avenue, Philadelphia, PA 19143.