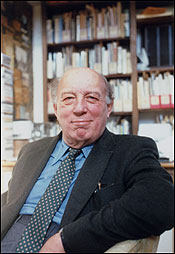 A Seminar with Professor John Lukacs

More than two hundred years after his birth (1805) interest in Alexis de Tocqueville is greater than ever before. He was read and venerated in the United States ever since his publication of Democracy in America, vol. I, in 1835 but, strangely, less so in France — until relatively recently. Students and scholars of Tocqueville now largely agree that the second volume of Democracy (first published in 1840) is even more telling and relevant than the first. We also know more about the private Tocqueville than before, due to recent serious biographies. Three questions about Tocqueville are still discussed and debated: (1) was he a conservative or a liberal? (2) was he a sociologist or a historian? (3) was he a believing Catholic?

Professor John Lukacs spoke about these questions at the Wynnewood Institute on 16 September, Tuesday, at 7:30 p.m. Furthermore he directed attention to two more questions: how did and does Tocqueville relate to the enormous rise in the power of the American presidency; and to the recent phenomenon of classless societies?